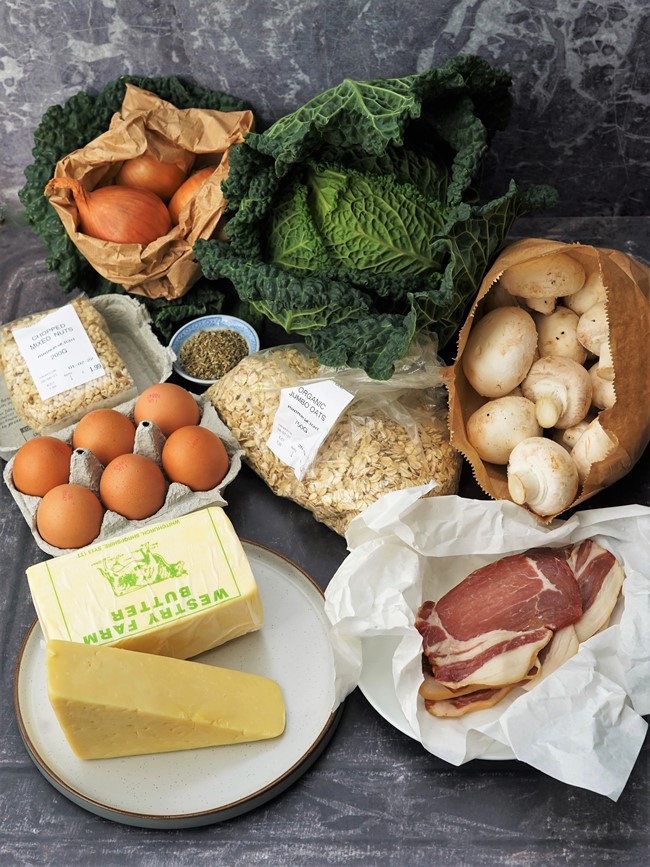 Feed a Family for a Fiver (Fest)

When I was asked by Totally Locally Leek to come up with a meal for a family of four for just five pounds, buying ingredients only from local independent businesses, I must admit I was rather sceptical.
But amazingly, I found it could be done. The result is tasty, nutritious and provides each person with three of their five-a-day veg portions.

I’ve always been struck by Totally Locally’s message that switching just a fiver a week away from supermarket and online spending to local independent businesses can have a hugely positive impact on the local economy.
For example, if every adult in Leek did that, this would mean a whopping extra £4.1 MILLION per year!

So, for this October’s Fiver Fest, how could I not accept the challenge to create a meal for four, costing no more than a fiver, using only the independent shops in Leek?
The result was Mushroom, Cheese & Bacon Oat Bake . I’ve also made a veggie version with nuts instead of bacon.

Frustrated by many budget recipes not including anywhere near the amount of vegetables we’re recommended to eat, I decided to set aside at least £1 of my budget for extra veggies to eat alongside.

I’m incredibly pleased with my Fiver Fest recipe and hope you’ll love it too!

Before I moved from a city to the Staffordshire Moorlands around eight years ago, like many people I did the bulk of my shopping in supermarkets.

But I’d begun to see many towns and cities lose their unique identities as the big chains took over. I’d also heard of farmers and other producers squeezed by the power of the supermarkets.
So, one of the changes I resolved to make was to spend more of my money with independent, local businesses.

At that time, I hadn’t heard of Totally Locally. But, as luck would have it, I ended up with Leek as my nearest town.

Leek is known for its thriving independent businesses, loads of them food and drink related.

To the cafes, pubs, restaurants, greengrocers, butchers, bakers, chocolatiers, pie makers, delis, wholefood shops, veg box schemes, beer and wine sellers, you can add its markets, including the mighty Sunday Supplement held on the first Sunday of the month.

Where I spent my Fiver

For the Fiver Fest recipe challenge I brought ingredients from four shops I regularly use.

• H Meakin & Sons is a traditional butcher established over 130 years. Now run by two brothers who are the fourth generation of the same family. From Meakin’s I bought smoked bacon, butter and free-range eggs.

• Gerald Harrison’s Greengrocer has been a Leek institution for over forty years. Here I got mushrooms, onions and a giant Savoy cabbage.

• Breckles Wholefoods sells just about every nut, seed, cereal, flour and pulse you can think of plus supplements and environmentally friendly products. I picked up organic ‘jumbo’ rolled oats, mixed chopped nuts and dried herbs. I also priced up salt and pepper here. Yes, I really did want to account for every single ingredient!

For those who like detail, here’s a breakdown of the costs for both the bacon and vegetarian versions of my Fiver Fest recipe.
All prices were correct at the time of writing. Here I’ve rounded them up or down to the nearest penny.

For the vegetarian oat bake with nuts instead of bacon, I increased the amount of cheese from 75 grams to 100 grams.
This was to make up for the bags of flavour that even a relatively small amount of smoked bacon can bring.

The Savoy cabbage was 85p plus 16p for butter and seasoning.
This gives a grand total of £4.99 for Mushroom, Cheese & Bacon Oat Bake served with buttered cabbage.

The nut version was bang on five pounds.

You’ll find full instructions for making my Fiver Fest recipe over on my blog. Tasty, easy and economical, I think it’s perfect for weeknight dinners. The bake is a simple mix of seasoned rolled oats (the kind you make your porridge with), mushrooms and onion sautéed in butter, plus cheese and bacon or nuts. Bound together with nutritious eggs, it takes just 20-25 minutes in the oven.

With seasonal veg on the side, I think it makes a wholesome, satisfying meal.
I went for Savoy cabbage, but if you want more variety, for around the same price you could halve the amount of cabbage and add a shredded leek.

We’re encouraged to eat at least five 80-gram portions of veg and fruit per day. So I’m particularly pleased that I’ve managed to cram THREE into this meal. You’ll find the calculation in my blog recipe post.
Any Mushroom, Cheese & Bacon Oat Bake leftovers will be fine in the fridge for 3-4 days or can be frozen. Also good cold, the bake is great for lunchboxes too.

Totally Locally on a Budget

I still shop at supermarkets and online and suspect there are few of us who don’t.
Because for me, Totally Locally isn’t about ditching them altogether. It’s about how switching some of that spending, even just five pounds a week, can make a huge difference to where we live. All those individual five pounds can add up to millions per year.

As well as improving our town centres, spending locally helps to keep money in the local economy. The businesses you buy from usually go on to buy from other local businesses.
Perhaps you think though that this way of spending is too expensive? After all, we’ve long been told that supermarkets are the place to shop if we’re on a budget.

But I think my Fiver Fest recipe shows it doesn’t have to be that way. It IS possible to create tasty, nutritious and economical dishes using our local independent shops.
Feeding a family of four for a fiver, including three of your five-a-day portions of veg, is pretty good value in my book.

And doing all that while also supporting your local high street can’t be bad.

Lynne lives in the beautiful Staffordshire Moorlands on the western edge of the Peak District. Sharing her home with with her partner Ian and their cocker spaniel Larkin. Lynne has been cooking, enjoying eating out and all other aspects of food for over 30 years. But was only a complete change of lifestyle, involving giving up her day job and moving away from a city, that gave her the opportunity to spend lots more time cooking, thinking and writing about food.

There are lots of tasty recipes on her blog as well as highlights of local places to eat out it is well worth a visit if you are looking for inspiration.

Find awesome listings near you!